Patchouli Flowers 🌸 The Freshest Of Flowers In A Unique Approach 🌸 We Know It’s The Little Things That Make Each Memory Last A Lifetime, Flower Shop 🌸 Couture Events 🌸

LOTS OF PEOPLE ASK ME HOW PATCHOULI BRAND WAS CREATED. FOR THEM I HAVE DECIDED TO WRITE THIS STORY …

The PATCHOULI Story begins with a wish, a name and a passion.

In 2012 I was in London for the … I do not know how many times, looking for inspiration. I spent there over a month – burning for a new beginning, for setting up a new business representative for me to allow myself to express myself. We, people, suffer a lot when we do not have the chance to create, to express ourselves.

So, I was wandering along the famous King’s Road and through Harrods, hoping to find something to catch my attention. It was there I’ve found some of the most opulent flower shops I’ve ever seen. I was swept by their sense of beauty, the artistic and creative boutique side. And then, I made the connection …

The connection with my name. Although I did not realize until that moment, my name was predestined for the floral world, towards which only (too) late I was directing my senses. My royal names are imposing, royal names, with echoes in the world history. But Viorica did not sound to me, until that moment, as a source of inspiration in none of my previous professional activities. Even though in the past I was involved in many other business activities, the greatest passion was only to come, or, better said, to the blossom, right from the etymology of my name.

Reaching this land of scents, colors and forms, I knew that the next step was the setting up of the first shop of floral creation in Romania. At first I intended to call it Patchouli & Bergamot , but it seemed too long. Patchouli is another name for Pogostemon Cablin, a bushy plant from the mint family, being one of the aromatic plants that grow in India. As of the 19 thcentury, the traders were using patchouli leaves between the cashmere wool shawls to protect the merchandise from the moths. The oil extracted from the leaves of this plant has a strong exotic aroma with a scent of sweet musk. In the East, the plant has various uses: in cosmetics, in aromatherapy, in treating nervous diseases or infections. In perfumery, the patchouli oil has been used since 1960. They say that sprayed on money or on wallets it attracts more money …

Another essence that delights my senses is the vetiver. Although both scents are masculine and strong, they are among my favorites – I, myself, being passionate of perfumes, which I collect from all my trips.

Following the decision that the brand name will be PATCHOULI, I visualized the concept of the entire floral workshop: from the interior to exterior. The space for the workshop to function in Piata Dorobanti is asymmetric, with lateral glass walls – meaning buchete de flori in cutie was a harsh volume that needed to be tamed in order to welcome the flowers. I thought that vintage curvy furniture contributes to the warming of the space. The centerpiece is the working table, the place where all is happening, while the black floor reflects the Patchouli logo background. 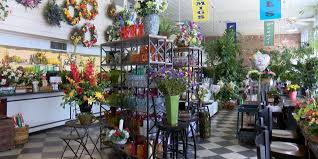 On the first part of the table I imagined us creating the bouquet, wrapping it up in tissue paper or in specially branded bags, while at the opposite end the creation process to start all over again. Once the entire process was settled, meaning the technique of combining colors and flowers and considering the client’s budget, we succeeded to create spectacular bouquets within 5 to 10 minutes!

The idea of a floral concept store was highly welcomed by the public, from the very beginning. The clients were amazed about the fact that the entire process was unfolding before their very eyes, rapidly and efficiently. At that moment, Patchouli was the sole concept store of the kind on the entire Romanian market, so the most frequently asked question was whether we are an international franchise. The concept in itself is still not widely spread, due to the fact that the custom is for the bouquets to be ready made and exposed for rapid sale. We chose to continuously have very fresh flowers, so as our customers may have the chance to appreciate them and to participate at the creative process. Hence, they are always aware of the content of the bouquets they buy.

People were very excited with the newly and stylish opened store, always full of flowers from all over the world. The window was aimed at being another sensational element of our marketing strategy: wooden cages full of luxuriant flowers disposed in a chosen lack of symmetry and boxes with succulent plants – a static show full of life at which every passer on the street was a witness in awe! Many of these passers were reticent at coming into the store… they were expecting exorbitant prices.

I remember the first order I made: I could’ve decorated the entire Dorobanti market with that quantity of flowers! Being in contact with these beauties for the first time, I wanted to learn, to feel their variety, diversity, color and to master them in every aspect. I was longing to meet Anthurium, Amaranthus, Cymbidium, Phalenopsis, Astilba, Eustoma and the rest of the flowers that caught my eye and spirit. The space of the store of 38 square meters, plus the basement, soon became insufficient, despite the overlays our imagination came up with. The only solution was to go out in the street and exhibit our flowers and bouquets, to the delight of the passers.

I started to study and register the behavior in time of each flower, so as to learn its resiliency, its specific characteristics. Consequently, I made my own selection and customized my orders so as the variety of merchandise one may meet in Patchouli concept store cannot be found no place else.

Along my journeys I was constantly attracted by books and magazines in the domain. I bought everything I could find about flowers and decorations, thus created a vast collection of catalogues. The next step was to ask the suppliers for new and original types of flowers that they never heard of… Slowly, they started to import them and the uniqueness and specificity of our offer have won a special place in our client’s hearts.

Moreover, from the very first day our store opened, our staff was specially equipped with branded aprons and vests. We did not stop there: the branded ribbon, the tissue paper and the black paper bag, all of them have contributed to our brand identity. No one before had the courage to use black in this kind of creations, despite this color’s elegant and stylish touch, especially in combination with silver and gold!

A visually attractive combination of flowers was studied in order to realize exquisite and unique bouquets and arrangements.

This is how we found our place on the market, we got to be known and, following constant positive feed-back, we became notorious. One of the feed- backs close to me heart and that will remain in my memory forever is that each time a Patchouli bouquets or arrangement is presented it’s like a Chanel piece of fashion entering the room – a reason of huge satisfaction for myself and my team.

People, in general, were used to a round and extremely compact type of bouquet. We started to educate our customers and to impose our vision on this art, which was a little bit difficult at the beginning. Slightly, the taste for our creations grew so as we can say that we have launched the new trend in the floral design, another great satisfaction for our work.

My favorite floral design is the ‘sauvage’ type, the one that gives you the feeling that the component flowers just have been picked up from the garden –fresh and special. The wrapping added to the style: we have introduced lace, ribbons of all kind and colors, newspaper type of exterior packaging.

Starting from this unconventional wrapping, in the context of running a flowers concept store, we created also unconventional arrangements using any object that was inspiring us: boxes, cups, objects of all kind and value. Eventually, a floral arrangement may be realized both in a silver or rusty bowl, each of them bearing their own originality.

Owning your business comes with the greatest advantage of all: freedom of decision. So, I decided to give up some flowers that were extensively used on the Romanian market, such as the one we call ‘bride’s flower’, as well as Aspidistra, which is mostly used at funeral creations. In exchange, I introduced various types of eucalyptus: Euchalyptus Cinerea, Baby Blue, Berry, with berries or flowers, or fruits, mimosa and many other types of green plants that add even more value to the bouquets.

We also have created the Patchouli candle to represent us by its pithy, vibrant scent. In this way, through the elements that we gathered, we succeeded to make Patchouli a remarkable brand in people’s life, seeding in them the desire to give more, better and more passionately.

Despite my strong character, the background is one of a sensitive woman. I love perfumes, trips and adventures – it’s them from where I get my inspiration. Even before Patchouli concept store was created, when I was acting in the advertising industry, I participated at various design international fairs and events. I applied that experience once with launching Patchouli. Passionate by interior design, I created and built a spectacular fountain and placed it among flowers, like a tranquility oasis in the back of the store. In this way, I wished to inspire those who come inside a peaceful feeling, like the one in the Garden of Eden.

Lots of people envy us for the nature of our work: the wonderful environment, constantly surrounded by the nature’s beauty. However, underneath that is the assiduous work, the sweet care for the flowers, customers and the business as a whole.

Among my trips, an experience dear to my heart, like an anniversary present, is the meeting I had with Jeff Leatham, one of the greatest floral artists of the world, the artistic manager of the Four Seasons Hotel in Paris. The “eternity” I spent with him and his advice have been a true joy and represented a new source of inspiration. I hope to meet him again, why not, in the Patchouli ‘garden’.

It is this experience that inspired my new project – the PATCHOULI Garden Showroom – a place where to withdraw the PATCHOULI essence from. I combined flowers with interior design and created a new location where a house and its garden host the home, flowers and decorations concept. It is a special concept, targeting those who appreciate nature and aesthetics in every corner at home, at the office, in the restaurants or hotels. It’s about colors, shapes and perfume symphony, where the queens of the show change their gala costumes. Behind them, as the director, my aim is to admire and talk to them, delighted by their majestic silence. Like them, I myself, become speechless. When our silent dialogue turns into a meditatively one, just the beauty of flowers give rise to new stories.